– Five Stars
“I thoroughly enjoyed this book. I would put this book on my “must read list” for aspiring public service professionals. The book provides a concise formula, including how-to suggestions for self-improvement, to guide the manager. Robert Beezat blends academic, philosophical, and practical principles to show how character influences success as a manager. He draws upon his experience as a local government and non-profit manager, along with hundreds of management consulting assignments, to synthesize these principles. From the academic sphere, Beezat relies upon Henri Fayol who extols that “moral character….determines the quality of decisions.” The author reflects on the limits of a manager’s ability and philosophically discusses how a manager must recognize that for many factors, e.g., knowledge and certainty, there is a limit on the precision of managerial decision making. Beezat’s practical gems, based on his lifelong management experience, are sprinkled throughout the book and brought a smile to my face because his examples mirror some of my own. Fatherly advice to “do it right the first time” reminded me of my father’s directive to “think before you act.”

Beezat shows how actions and behaviors shape our character—and how that character impacts our decisions and the success of the organizations and people that we manage. You should give this book serious consideration.”

– Five Stars
“Excellent Leadership book that really speaks volumes about how very important the treatment of employees drives the mission of the organization. A must read and one that so many should soul search their own management style.”

– Five Stars
“A fantastic practical review of what it takes to be a great leader/manager in an organization.”

– Five Stars
“Excellent! Sent to both my sons to help with their jobs.”

January 1, 2017, The Chicago Tribune, IL. “Experts (and a comedian) offer workplace advice for the new year” by Rex Huppke

October 2016, “Build Your Character, Make Better Decisions – 10 Activities to Strengthen You and Your Organization” by Robert Beezat as appeared in the October issue of Public Management Magazine.

After years of writing about workplace problems, I’ve finally found a universal solution: Every company in America needs a Robert Beezat.

You probably haven’t heard of Robert Beezat, but after I tell you about him, you’re for sure going to want one.

He’s a veteran manager, now 74 and semiretired, who has written a book that isn’t the kind you’d find on shelves at airport bookstores or stacked high at a Barnes & Noble.

It’s not glossy or filled with fancy charts and edgy buzzwords. It’s short — an even 100 pages — and not much to look at from the outside.

But, oh, what’s inside. Imagine you’re lucky enough to have a veteran colleague, a person of character, a person whose career is enviable, and that colleague takes you aside for a couple of hours and shares the secrets to being a good worker and a good manager.

That’s what it’s like to read Beezat’s book, “Character Based Management.” (Even the title’s a little dull, BUT IT DOESN’T MATTER!)

The secrets he shares aren’t complicated: shut up and listen; learn by watching others; do what you say you’re going to do; foster a sense of love — yes, love — in your workplace.

It’s all simple, in a sense, but it’s not the sort of thing we hear often enough. If we did, and we took it seriously, our working world would be considerably more pleasant.

“I’m one of 10 kids, the second oldest, and we learned to get along with everybody and work with each other and care for each other and respect each other,” Beezat told me. “I guess that just always kind of carried over into my work life. You read all these management books and they all have some pluses to them, but they don’t last because they don’t get at what the core is when it comes to management, which is who you are. If you don’t have good character, people see that.”

He builds his book around a wonderful quote from Henri Fayol, a French engineer who developed a general theory of business administration in the early 1900s: “In making decisions … the moral character (of the decision-maker) … determines the quality of the decisions.”

Beezat encourages readers to “find ways to understand” the characteristics and behaviors that enhance a person’s character, things like kindliness, equity, a willingness to accept responsibility and tact.

I’m guessing most people have known someone in their career like Beezat, a person who just seems to get it, the one colleague everyone likes to work alongside.

He recounts one of his proudest moments as a manager, when he was leaving for another job and a co-worker spoke up at his going-away party and said: “Bob, you bring out the best in people.”

He said he was stunned and then realized: “I have to live up to that.”

That’s part of why he wrote the book. And part of why I’m sharing the book with you all is because I don’t think we have enough people like Beezat passing along this kind of information to younger workers and rising managers.

One of the tenets of his advice is to learn from watching others, but too often there isn’t a Beezat around to watch.

“I think one of the most important things about how we think about character in relationship to managing people is, ‘Do we really respect the other person?'” he said. “There’s all kinds of philosophical and theological and religious ways of people thinking about people, but what I think is important is to think about yourself. If you sit down to talk to your boss or anybody, you know you have some value and worth as a person. You’re worthy of respect and you want to be treated that way, and you know when you’re not treated that way. To have that respect for people, it’s not just an attitude, it’s part of who you are, how you see yourself and how you see other human beings. That basic respect has to be there, it has to be valued.”

And what of this love in the workplace he describes? It’s not a romantic love, of course, but the kind of mutual love teammates express after winning a championship.

“That means they care for each other, they want each one to succeed, they all realize that none of us is perfect and we all need some help sometimes,” Beezat said. “That flows from who we are, how we see ourselves, our approach. That care for others is evident to other people. I don’t know how you teach people to love in a business, except you model it. You care for them, you respect them, you want them to succeed. People know that and then they bring their best selves to the workplace.”

We must listen to the people around us who have strong character, particularly in a work environment.

We should model ourselves after them and take the time to hear what they have to say, even if they aren’t flashy or full of buzzwords and cutting-edge concepts.

We should all be lucky enough to have a Robert Beezat in the office. Someone giving us knowledge from a work life well lived. 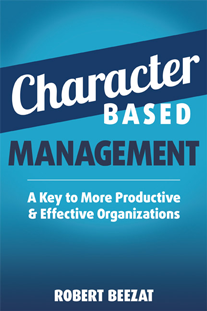